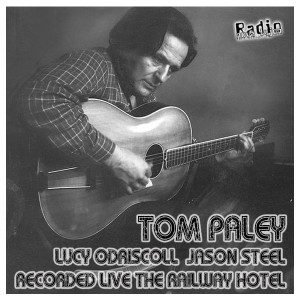 “Tom Paley is one of the great legendary survivors of the American folk and country scene. He played and sang with America’s greatest folk hero Woody Guthrie, he was a founding member of that massively influential trio The New Lost City Ramblers in which he worked alongside Mike Seeger and John Cohen to revive ‘old time’ styles from before the Second World War, and he has recorded as a soloist, with Peggy Seeger, and with the New Deal String Band. Now in his mid-Eighties, he’s a fine singer with a no-nonsense, easy-going style, and a multi-instrumentalist who can switch from guitar to banjo, autoharp and fiddle. He’s also an entertainer who can sometimes startle a folk club or recording session with his outrageous sense of humour.

Yeah, he’s not really paying any attention to me… x