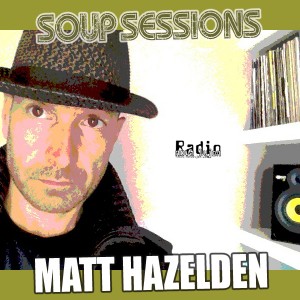 2100HRS (UK) the Soup Sessions with Matt Hazelden gracing the decks… NOT TO BE MISSED!
In the mid to late 80’s Matt Hazelden was a prolific DJ and promoter throughout Southend and Essex, during which he appeared with major artists of the time, such as Jungle Brothers, DJ Cash Money, Tim Westwood, Darren Emerson, Derrick May and Colin Favor. Heavily involved in introducing Hip Hop and Rare Groove to the county Matt then opened one of the first specialist dance music record stores in Southend – ‘Minds in Motion’. This coincided with the explosion of House Music which the store soon specialised in. By the early 90’s Matt had moved to London and became resident DJ alongside Pete Tong and Dave Dorrell at Nicky Holloway’s Milk Bar. This led to a career in the music business working as a marketing executive for influential dance labels such as Acid Jazz, Deconstruction, Wall of Sound and Virgin as well as being a University lecturer in Music Marketing. Currently Matt is involved in Silver Odyssey events with parties running in Ibiza, London, LA, Paris and more.